St. Bernard dogs were first bred by monks living in St. Bernard Pass and are known for rescuing humans trapped in dangerous, snowy conditions due to their good sense of direction and ability to withstand the cold. In a surprising role reversal, sixteen rescuers were recently called out to rescue a rescue dog on a mountain in northwest England. 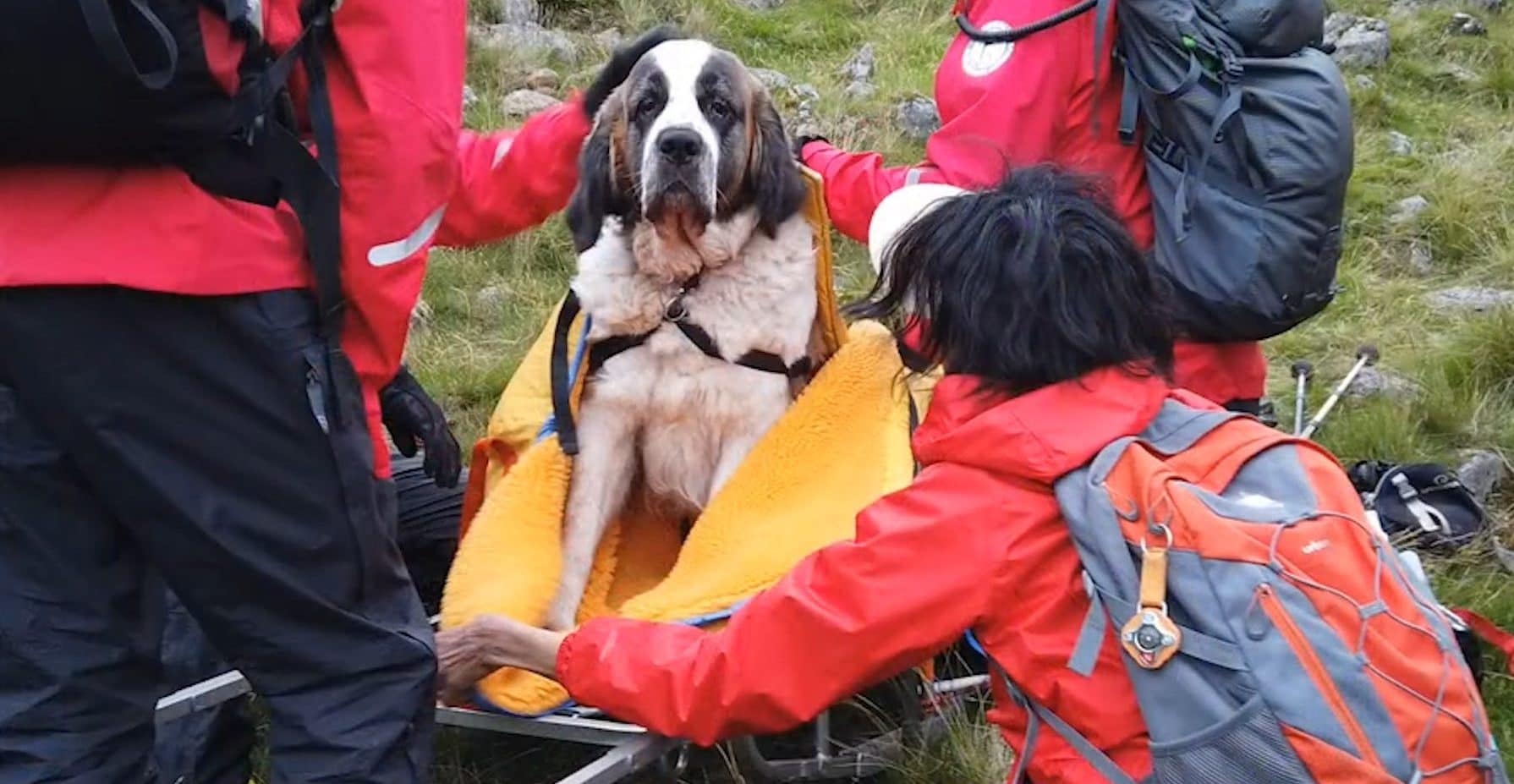 The St. Bernard, Daisy, and her owners had climbed to the summit of Scafell Pike and were descending again when she showed signs of pains in her legs. She sat down and refused to get up again. Her owners contacted the local police who called in a rescue team to help out. Daisy’s owners kept her hydrated and fed while they waited. Daisy evidently had a hard start in life and was rescued by the current owners a few months ago. 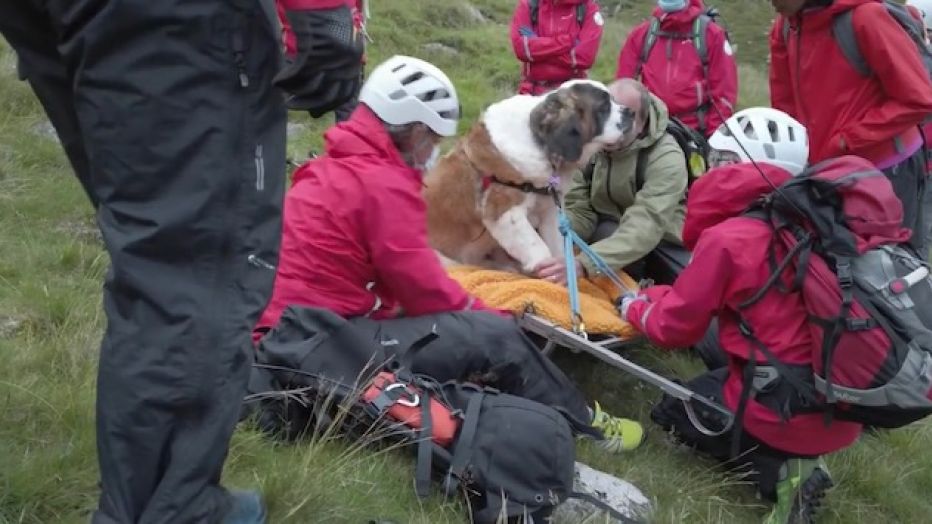 The Wesdale Mountain Rescue team said they had no hesitation about mobilizing and helping to retrieve Daisy. It is apparently not unusual for them to be called out to help with animal casualties but this was the first time they had to rescue a St. Bernard. They received medical guidance from local veterinarians about what to do when they reached her. The 16 members of the team needed to move quickly because the weather was expected to deteriorate later.

Team members were able to assess Daisy’s condition after introducing themselves to her and winning her trust with a treat or two. They gave her something for the pain and then faced the challenge of getting the 121 pounds (55 kg) dog onto the stretcher. They had to use plenty more treats to maneuver her onto it so they could carry her down the mountain. Once she was on the stretcher, the rescue operation could carry on much like the rescue of any human adult. 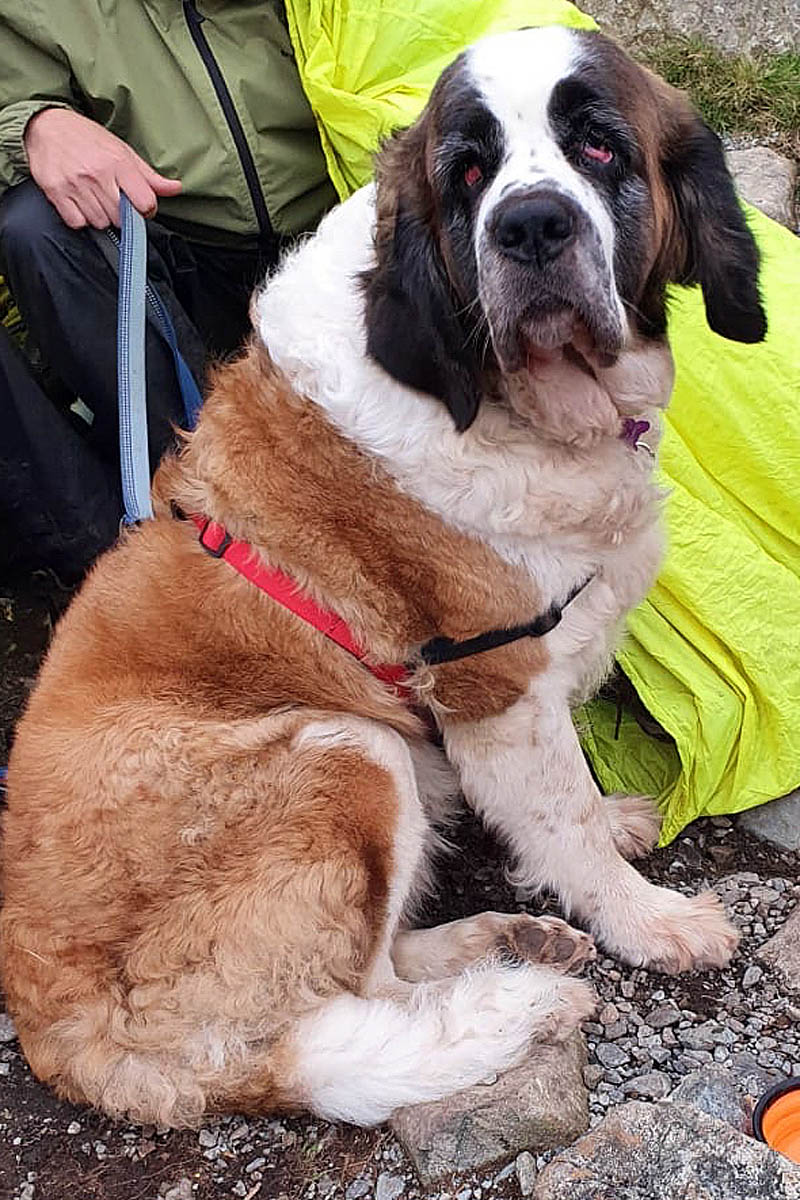 Daisy is recovering well from her ordeal. Photo: Wasdale MRT

The rescue operation took five hours and the team faced a number of obstacles, such as navigating over rocks, forging a river, and getting the stretcher over a fence. Daisy was very well behaved throughout the process which enabled the rescue to proceed smoothly.

Once the team reached the bottom of the mountain, Daisy got back on her feet and even managed to wag her tail a little. The rescue team joked that she seemed a bit sheepish and probably felt a little embarrassed that she had let down the image of her cousins bounding around the Alps with barrels of restorative brandy around their necks.  Daisy has since been reported to have had a good night’s sleep and be back to her usual high spirits.